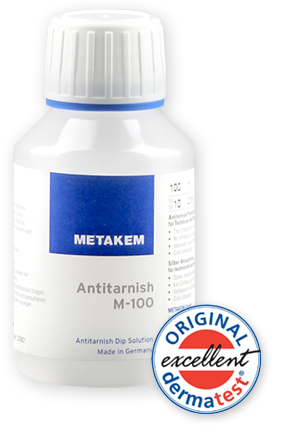 Silver is an element, which is a soft heavy metal with good ductile properties and excellent electrical and thermal conductivity. It is a relatively inert noble metal with a standard reference voltage of +0.7991V. Also, at higher temperatures it does not react with the oxygen in the air.

However, it is generally well-known that silver oxidizes, even when it is in use. It is only a question of time until it forms dark, brownish, blue to blue-black specks or discolours completely and thus in common parlance is said to be "tarnished".

The reason for this is the particular sensitivity of the surface of silver to gases containing sulphur, in the form in which they occur in the ambient air. Thus even traces of hydrogen sulphide in the air are sufficient to discolour silver. For even at room temperature there is a reaction between hydrogen sulphide and silver, in which silver sulphide (Ag2S) is formed, and which then leads to the darkening in colouration referred to above.

The influencing factors, which basically cause the silver to tarnish, are set out schematically in the following diagram. The reaction scheme makes clear the complexity of the silver tarnishing/silver corrosion problem in a relatively vivid way.

Under the influence of sulphurous bonds brownish black silver sulphide (Ag2S) is formed from metallic silver. Oxygen in the air or the bleach containing oxygen in cleaning agents reacts with silver to produce black silver oxide (Ag2O) or silver suboxides, which can react in consecutive reactions with sulphurous components to form silver sulphide or with chlorine ions to form silver chloride (AgCl). However, in certain conditions, silver chloride can also form from bleaching agents containing active chloride and silver. Silver chloride, which, at first, accumulates as a white deposit on the silver components, is however not light resistant and decays to grey to black silver.

E-Mail: This email address is being protected from spambots. You need JavaScript enabled to view it.
Web: www.metakem.de

Mrs. Eva Gahnz
This email address is being protected from spambots. You need JavaScript enabled to view it. 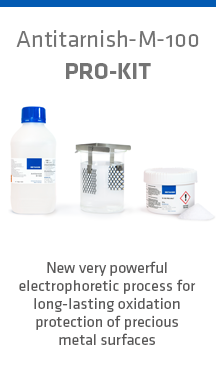